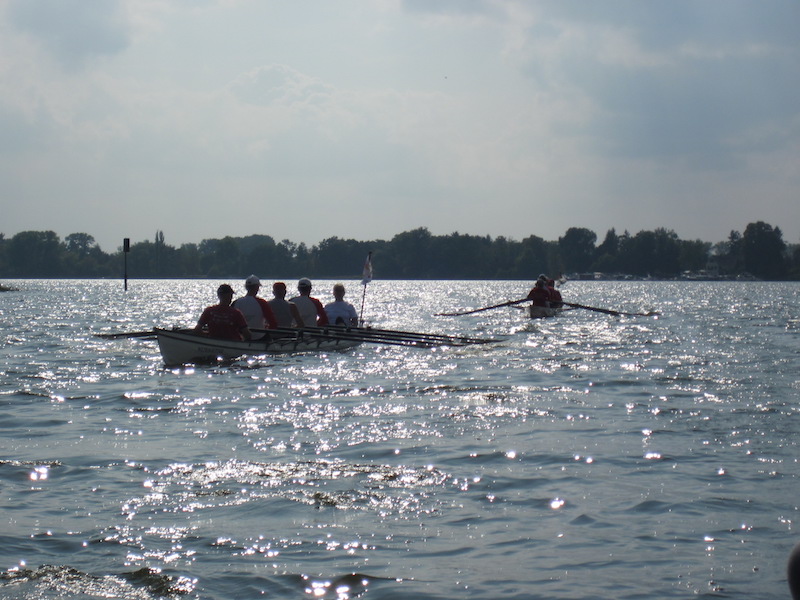 Poetry is that which is lost in translation[1]. I have lived for some 40 years in some form of translation, so when I was offered the chance to write this report on the “Wanderfahrt” in English, I was only too happy to accept. Several colleagues offered to translate my text, but I hope that I was not rude in the way I turned down these offers. I want to offer all who read it the chance to make their own translation for their own needs.

Even if you do not understand the English language, just read it out loud and let the words work on you.

There are a number of words from German which have found their way into English. Possibly the most prominent is “Kindergarten”. Another is Frankfurter[2]. Beloved of theologians is the wonderful prefix “ur” as in Urquelle or Urtext[3]. We may well have to add “Wanderfahrt” to this small list. Despite trying different dictionaries and web-sites I haven’t been able to find an English equivalent.

There is of course the English “wander” but with its soft liquid w it has a very different feeling to the hard w of German.  Just listen to the carol “I wonder as I wander”[4], or that iconic poem of the English romantics “I wandered lonely as a cloud”[5]. To wander has something very light or ephemeral about it, soft and delicate, and indeterminate. Can this be said about a “Wanderfahrt”?

I will attempt to approach the essence of “Wanderfahrt” in different ways which may bring us closer what it means or is. In doing this I will reflect on our common experience of the “Wanderfahrt” of the ARC and BRV in September 2018.

A: At its most simple a “Wanderfahrt” is to journey in a rowing boat from a to b.

Our “Wanderfahrt” started in Havelberg on the river Havel, proceeding with two and later three boats upstream to the Wannsee. There were overnight stops in Havelberg, Grütz, Milow, Brandenburg-Plaue, Bollmansruh and Ketzin[6]. The weather was excellent. The water was smooth and unruffled. The locks were few and far between. There was very little traffic with hardly any waves or wash to worry about at all. The accommodation was of great variety, not to mention quality. B: A “Wanderfahrt” is sport. Well at least “up to a point”.[7] Some of us had rowed seriously in younger years in races, regattas and other competitions. Others had come to rowing in more mature years where the need to triumph over others had receded behind the desire to enjoy their rowing in a more stately manner. Was it a deep seated worry in the form “Can I still manage what I could do easily many years ago” or the deep desire to be in the “winning boat” which caused us again and again to throw challenges across the water to the others and initiate little spontaneous races? If sport is about learning to win, it brings also with it the need to learn how to loose. I will offer at this point no further accounts of what may already have become legendary.

C: A “Wanderfahrt” is a way of life and not a form of life[8]. We are all more or less dedicated oarsmen and women. We spend quite a lot of our time rowing and as such taking part on a “Wanderfahrt” is part of our way of life. We wish to row as well as possible considering our age and our growing bodily weaknesses, and are well aware that we are no longer what we were once. This became very obvious as the ARC youngsters came to join us at Plaue.

D: There is a new word which was formed for the first time in German by Otto out of the depths of his Bavarian Roman Catholic spirituality – “Besinnungsrudern” – “spiritual rowing or meditative rowing”? – which will need to find its way into English and German dictionaries. For whatever reason, this was a challenge to me as a minister of the word and sacrament. Not wishing to missionize anybody I chose as my text for the day the message on Ralf’s shirt (the motto of the Free University in Berlin)[9] and showed how this helped us to think about the quality of each individual stroke as an expression of finding oneself in the sense of the metaphysics of rowing which I developed with Ralf a few years ago. Mixed with a bit of de bello Gallico and dog Latin[10] even Otto seemed to be satisfied, as could be seen when a light grin crossed his face.

E: Wanderrudern is a meeting with the Arts – not in sense of concerts or performance but rather the little spontaneous happenings – the lights and firework of the Horse Market in Havelberg, organ practice for the coming Sunday in the  Dom in Brandenburg (why had the minister who would be taking the service chosen “Wachet auf ruft uns die Stimme”, an Advent hymn   in September?), the windows in the St Marien-Andreas Church in Rathenow especially the central choir window with Christian, jewish, muslim, and  buddhist symbols[11] and last but not least “the last night of the proms” on television in our hostel in Kretzin (a cross cultural experience for those who saw it for the first time). F: Wanderrudern is a communal way of life which demands flexibility and the readiness to work together – the “landdienst”  buying food, maintaining the supply of drinks, and picnics. In Grutz an evening meal was created from nothing in a kitchen which hadn’t seen a cook in ages. What I appreciated especially was the tender loving care for the sick and suffering.  All this only functions so well because of careful planning by Martina, Roland and Nane G: A Wanderfahrt is a conversation with nature in many forms – the landscape of water, meadows, woods, fields, industrial agriculture and wilderness, animals, birds, fish. I have to admit that there are others who can describe this far better than I. In the early morning in Grütz I was woken by screams, which I thought could only come from our ladies taking an early morning swim. Should I rescue them? No! When I eventually got up, I was told that it was geese flying through the mist lying on the surface of the river.

H: Is a Wanderfahrt escapism? We were immersed in a landscape seemingly without people. Rathenow was the only town where we landed. Yet at the same time dreadful things were happening not very far away. We, or at least I, were not aware of it, so peaceful was the river on which we were rowing[12].

The danger of a report on a Wanderfahrt is that it may quickly descend into being a series of anecdotes and stories[13].

But as I hope I have been able to show, a Wanderfahrt is a process involving many different levels of expression and understanding. Not the least is the skill of the “FahrtenleiterInnen” in setting the different crews together, so that they can enjoy their rowing. For this and the many other aspects of their planning and organization, Martina, Roland and Nane deserve a great deal of thanks from all of us who year for year look forward to the announcement of the next ARC/BRV Wanderfahrt.

[1] This is not about the film with Scarlett Johannsen but rather an old adage about what happens in translation.

[2] This may seem odd but it really means Wienerli. Or is there something happening here which I haven’t recognized.

[3] In renaissance times in humanist circles we would have said „ad fontes“.

[4] https://www.youtube.com/watch?v=kN5fVEKqIdc von 18.09.2018  – here a version with John Rutter and the Cambridge Singers. As this is an Appalachian Christmas song, you might find the Joan Baez version in Youtube more authentic.

[5][5] William Wordsworth (1770-1850), to be found in any decent English poetry anthology. Wordsworth and his friends Southey and Coleridge discovered the Lake District, as the source of their romantic movement. They will certainly have rowed on the various lakes there. Coleridge (1772-1834) was at Jesus Cambridge from 1791-94 (thirty years before the founding of the Jesus College Boat Club) but left without a degree. As with several prominent Jesuans the problem was either drugs or women (Cranmer was allowed back again after the death of his lady love and went on to become Archbishop of Canterbury under Henry VIII, reformer and first Archbishop with a wife, Lord Snowden cox of the Cambridge Blue Boat 1950 went on to marry Princess Margaret the Queen’s sister, Dexter was cricket blue and captain of the MCC – the English cricket team – and won the Ashes against Australia etc). But both Cranmer and Coleridge have their memorials in the south transept of the college chapel.

[6] CS Forrester describes a similar journey in “The Annie Marble in Germany” which took him and his wife in a small motorboat from Hamburg to Berlin. His classical contribution to “Wanderfahrt” stories is “Flying Colours”(1938) in which he relates how his hero Captain Hornblower escapes imprisonment in napoleon France with his First Lieutenant Bush and boatswain Brown. He falls in love with a countess in her castle on the upper reaches of the Loire, while building a rowing boat with which the three heros row to Nantes, steal a French ship and sail to freedom!

[7] Compare the usage of the phrase “up to a point” in “Black Mischief”, Evelyn Waugh’s novel on the dangers of journalism in the mid-thirties of the last century or being a journalist in Africa at this time.

[8] An important distinction which Didier Fassin discusses in „ Das Leben – eine kritische Gebrauchsanweisung“ (the Frankfurter Adorno lectures 2016 – Suhrkamp 2017) where he reflects on Wittgenstein’s (Trinity Cambridge) attempt to define what is life. In our context of rowing we could say Steve Fairbairn’s whole life was about sporting success in which ever sport he took part – a form of life. In his time at Cambridge, rowing was a way of life which meant a great deal for him. (see his biography “Fairbairn of Jesus” which devotes at least as much space to rugby and cricket as to rowing)

[12] Cf the cartoon in the Badische Zeitung: www.badische-zeitung.de/karikaturen/maassen-rudert-zurueck–156566737.html  I have the feeling that besinnungsrudern would have would have done those involved a lot of good.